The highly versatile Roman Shade is meticulously handcrafted and gives any room a bold, clean look. It can be lined, blackout lined, or used with Sol-R-Control fabrics. Like other shades, it can be cord, clutch-chain operated, or motorized. Roman shades are fabricated in New York, which allows you to specify your own fabric. Choose from different fold styles to fit your project.

The most commonly used style, Flat Roman Shades offer a clean and finished look. They feature evenly spaced pleats that are separated every 6-8 inches and fold neatly on top of one another when raised or lowered. Flat Roman Shades require less fabric than other decorative shade options.

The Double Roman Shade is the most luxurious of all the Roman Shade styles. Featuring overlapping folds that cascade down the full length of the shade, a Double Roman Shade includes horizontal supports at each back fold that are attached to the spacing tapes, thus creating an even, structured yet soft appearance. These shades improve a room’s acoustics while reducing the intensity of outside sound, maximizing heat insulation, and allowing for more drapery opacity. Trim is available. 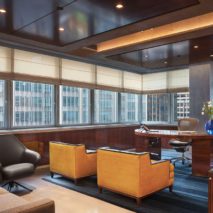 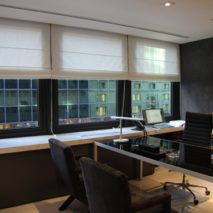 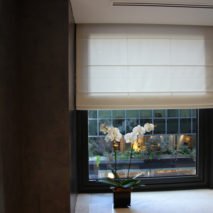 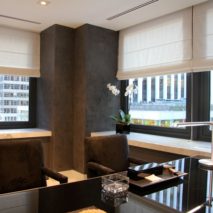 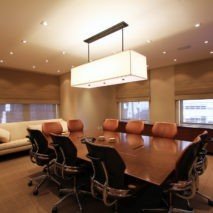